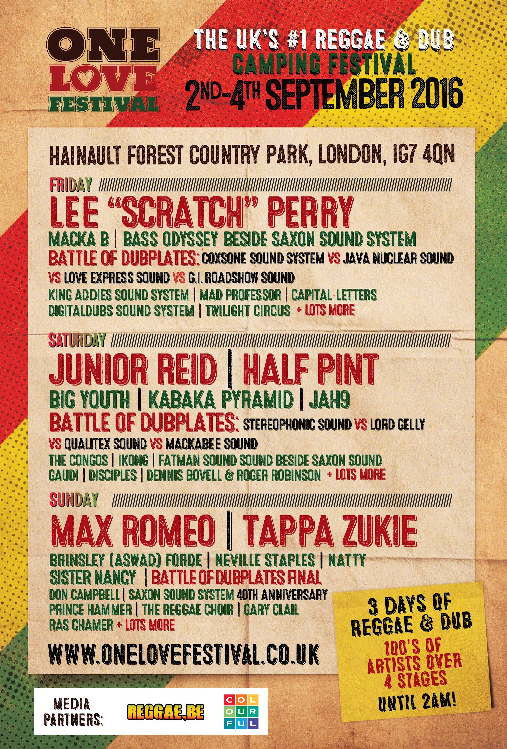 With the biggest ever line-up over 3 days and the most extra festival activities, biggest craft and food marketplace and walk around performances, Onelove Festival 2016 is set to be the most exciting, largest and best festival yet.

Over 70 Bands play on two live Music Stages including Lee 'Scratch Perry', Junior Reid, Half Pint, Max Romeo, Tapa Zukie and many more, with the biggest Sound Clash ever, where original foundation sounds from 60’s,70’s and 80’s come together for ‘Clash Of The Titans’ in our legendary annual Battle of Dubplates, with world famous DJ’s, Producers and live Dub acts entertaining crowds until 2am in two DJ Marquees.

A spokesperson for Onelove Festival said:

"One Love Festival a melting pot, a multi-cultural multi-ethical, free trade and environmentally-friendly event, buzzing with creativity, fun, ideas and soul. One of the most diverse and unique festivals in the UK, the One Love Festival offers something for everyone and is an experience that should not be missed. "

Voted “Best Radio Station” at Urban Music Awards (2015), Colourful Radio's founder, Kofi Kusitor MBE said: "the unique radio station I founded is yet again remaining true to its values and partnering with events that are unique yet diverse, and make significant impact while retaining their cultural relevance."