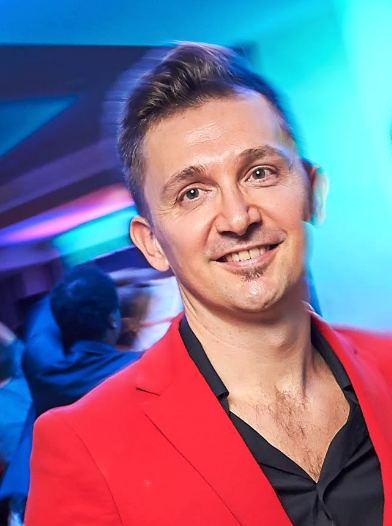 
Coming from Croatia, a country at the crossroads of Central and Southeast Europe Europe the last thing what Vladimir had in mind for himself was involving himself professionally in the world of salsa and mambo and founding one of the world's most prestigious salsa events: The Croatian Summer Salsa Festival.

Initially what was supposed to be a weekend event for friends and local salsa community, a sort of expression of the passion for the dance, in the next 15 years it transformed itself to a series of international events attended by more than 5,000 participants from more than 65 countries all over the world that last 18 days and spans 2 destinations in Croatia - city of Rovinj and the city of Opatija.

Running the festival(s) for 15 years proved to be a period full of obstacles and challenges that influenced Vladimir's both private and professional life - a period of successes, failures and extensive learning about business, people and himself.

Today as it was 15 years ago, Vladimir keeps developing the original idea and the intention of the festival which is to provide world class dance education for improver to advanced level dancers in the fields of afro-caribbean dances while at the same time providing unique experiences in terms of social dance hours - and all this in the charming environment of some of the most beautiful seashore cities in Croatia. Beaches, hotels, boats, streets, old tobacco factory, squares, islands - the whole town is a dance floor for visitors from all around the world, living and breathing salsa, bachata, kizomba.

It is by no surprise why then the whole imagery of the festivals was crowned as SEASUNSALSA brand - signifying in its own way the energising cocktail of the essences that represent life.

Vladimir's life philosophy is built around constant growth in personal development which in turn shows in our actions. That may go inline with festival participants comments about the ever changing festival in Croatia that each year delivers different taste but with the same seasunsalsa flavour. Is that one of the secrets of the business and personal success? For sure it works for Vladimir and his team.